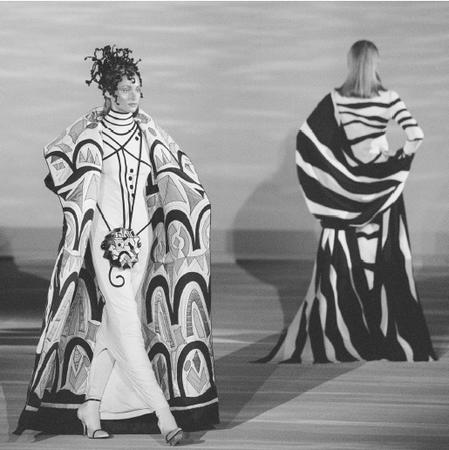 One Vintage clothing designer that keeps appearing at Déjà vu Vintage Finery is Louis Feraud.  He’s a real favorite of our shoppers- even Rachel Zoe has purchased a vintage silk Louis Feraud shirtdress from us.  His pieces have a fine quality and wonderful colors and draping.  A brief bio of Louis Feraud:
In 1950, Louis Féraud created his first "Maison de Couture" in Cannes, and by 1955 had established a couture house in Paris on the Rue du Faubourg Saint Honoré (near Goyard and my favorite store in Paris, Colette).  From the mid 1950s he was dressing the Parisian elite and designed the wardrobe of Brigitte Bardot for many of her movies.
The early 1960s saw Louis Féraud hire the young unknown designers Jean-Louis Scherrer (another wonderful designer who appears often at Déjà vu Vintage Finery), Margit Brandt and Per Spook.
In 1970 he signed a contract with Fink (Germany) for a ladies' ready-to-wear collection. The year 1978 was an excellent one for Féraud: he won the Golden Thimble Award for his Spring/Summer 1978 Haute Couture Collection. He went on to claim this accolade again in 1984.
Adding to his growing collection of honours Louis Féraud was elected Prince de l'Art de Vivre in 1991. In 1995 he was decorated Officier of the Legion of Honor by the French President. His daughter Kiki signed her first Haute Couture collection in with Féraud in 1996. The head Haute Couture designer throughout the 70s,80s, 90s remained the Icelandic designer Helga Bjornsson, known for her theatrical and innovative style. In September 1999 the Dutch group Secon acquired Féraud. He died that December, aged 79 after a long and severe battle with Alzeihmers.
We love Louis Feraud pieces at Déjà vu Vintage Finery- he was a very popular designer among the jetset residents of Palm Springs- we generally have 10-20 pieces of his in the store at any given time.
Posted by Deja Vu Vintage Finery at 3:23 PM